A Week in the Life of a Teacher (Week 15): Skipping Curriculum & A Snow Day?!

So, I skipped parts of the chemistry curriculum. I realized that I spent too much time at the beginning of the year reviewing math skills because many of my students were struggling in that area. It's also been seven years since I last taught chemistry. I'm rusty and I'm okay with that.  I think the important thing is that I came up with a plan halfway through the semester to determine what I was going to cover, what I would push back and cycle in when I had the opportunity, and what I was okay with cutting out of the curriculum this school year.  I could worry about it and beat myself up, but where would that leave me? I'd be an anxious mess, and I refuse to allow myself to feel like that.

On Monday and Tuesday, my students worked on the Covalent Bonding Student Learning Stations.  My A-Day classes started last Friday and were finishing up.  My B-Day courses were starting them for the first time. The stations served as a review because the students had taken notes the class period before. The only issue I ran into was that this week was also our state's End-of-Course (standardized exam) re-test week. I had a few students that had to re-take one or more of the EOC exams and missed class. 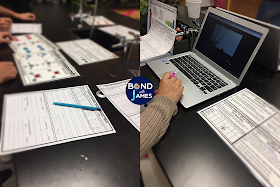 On Wednesday, I covered molecular geometry with my A-Day students.  It is the final concept that my students will learn for the fall semester.  Before students took notes, I had them set up one last graphic organizer into their interactive notebook. The notes were short because students already had experience drawing a few chemical structures. However, they were unfamiliar with molecular geometries.
I quickly explained how to use a reference sheet and then students had an opportunity to draw the rest of the structures using whiteboards.  During this time I walked around and assisted students as needed. Unfortunately, I'm facing a bit of a dilemma. School was canceled on Friday (because the city experienced snow for the first time in years). My B-Day students weren't able to receive the lecture over the new content.  I only have one more class period with them before they take the final next week.  I was going to use our last full class period to review, but now I will have to give them an accelerated version of the notes. 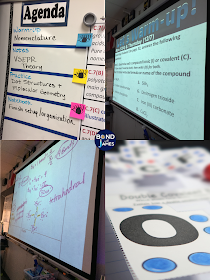 The semester is coming to an end and I cannot wait! I need a break. I'm sure we all do. As always, thanks for stopping by. I'd love to hear from you. Tag me @bondwithjames on Facebook, Instagram, or Twitter and let me know how my ideas or products are working to help your students!

A Week in the Life of a Teacher (Week 14): Unannounced Observation & The Dancing Teacher?!

My students and I returned from Thanksgiving break. This week also marks the first time that I released two vlogs in one week.


On Monday and Tuesday, my students participated in an inquiry activity that introduced them to the concept covalent bonding and covalent compounds. While I've used molecular model kits in the past (7 years ago), this was the first time that I was going to allow students to explore the models before delivering instruction over the content. 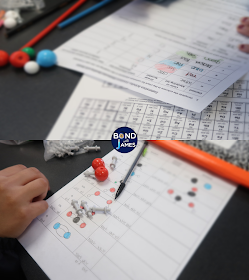 Overall, I felt it went well.  Unfortunately, I had to cut the time spent on the activity short because I needed students to put together their interactive notebooks over covalent bonding. We are going to use the pieces again to cover molecular shapes, and so students will have another opportunity to interact with the pieces after they have gained additional information about covalent bonding.

I also had an unannounced observation on Tuesday.  I predicted that it would happen during the final weeks of the semester.  Overall, I felt it went well. Some people commented that they felt it was unfair to have an observation immediately returning from the Thanksgiving holiday.  I didn't mind, and I also understand the life of an administrator, so it wasn't a big deal for me. Had I not been prepared then I might be singing a different tune.

On Wednesday and Thursday, my students took notes over covalent compounds and bonding. Not only did I do a little dance for my students, which you can see in the first 6-seconds of the vlog, but I also showed them a trick to help recognize (generally speaking) whether a compound is ionic or covalent. That tip may also be seen in the vlog. 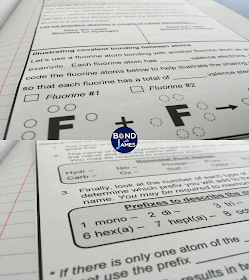 On Friday, my A-Day classes participated in another stations activity set, the Covalent Bonding Student Learning Stations.  I accidentally left the colored station signs at home - which is probably why I didn't take a bunch of pictures that day.  However, I was also making sure I was checking in with each student individually to ensure they understood the concepts. 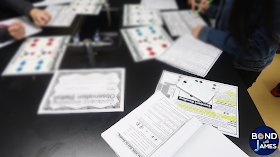 My B-Day classes will start the stations on Tuesday and so I am looking forward to another opportunity to work with students during the activity set.

If you're interested in the individual activities, click on the links below to find out what other teachers are saying about the quality of the resources!
Covalent Bonding Student Learning Stations
Covalent Bonding for Chemistry Interactive Notebooks